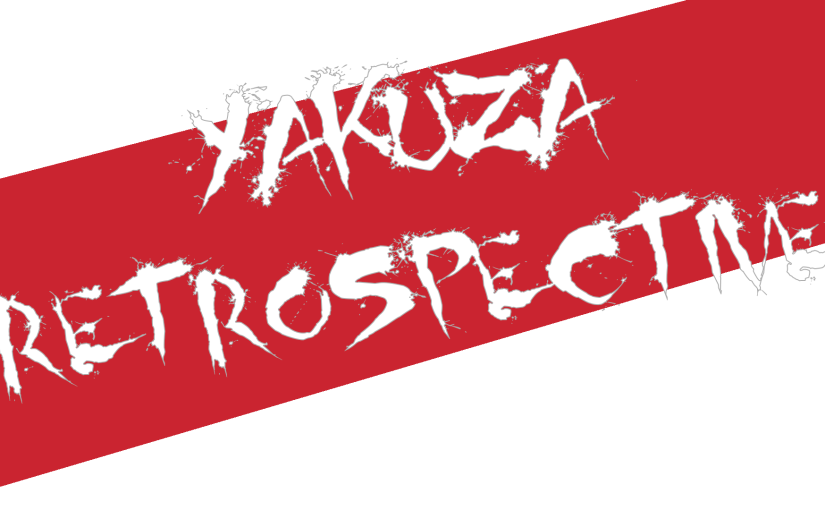 Part 1 can be read here.

The Yakuza games have mostly been known for their long “cinematic” cutscenes filled with loads of exposition interspersed with furious fights. This isn’t to say the gameplay is terrible (it’s decent), but it stands apart from the quality of the non-interactive pieces. Most of this is due to the great direction, but what really keep the games interesting is the long list of completely ridiculous characters and expertly timed cinematic moments, both funny and serious. While there were some problems with the first game’s plot, I still came away with a positive experience because of that. People like Majima Goro are just that unforgettable.

Two years after the release of the game it’s based of off, Takashi Miike (mostly known in America for his grossly disturbing and yet darkly humorous films) took at stab at directing a film based on the first game. It would be titled Yakuza.

The plot of Yakuza 1 (the game) follows Kazuma Kiryu after he takes the blame for shooting his boss instead of his friend Nishiki Akira. A decade later he’s out of jail and has a web of people and places to sift through to solve a few big problems. Find the missing ten billion yen that threatens to create war among the Yakuza families. Search for Kazuma’s old lover Yumi, and a little girl’s mother. And finally, kill Nishiki after he betrayed him and everyone else to claw his way to the top of the Yakuza underworld.

The movie starts with a couple of gang members holding up a bank on a hot day.

The hottest day of the summer.

A day so hot the movie will never stop saying how hot it is no matter how little relevance it has on the plot or characters.

Over the course of a single night it only somewhat follows the exploits of Kazuma as he wanders around for most of the evening before suddenly finding himself face-to-face with Nishiki some 30 minutes before the end. With him are a mess of other individuals all facing their own issues big and small. A group of cops negotiate with a pair of bank robbers who get increasingly irritated and aggressive with the heat. A teenage couple goes on a completely unrelated string of robberies themselves to pay off a money laundering Yakuza. A nondescript South Korean assassin sets out to kill Jingu, which consequently means Kazuma and Yumi have nothing to do with him. And all the while Majima Goro goes out looking for Kazuma, fights him in the batting cage from the game, and all but disappears afterwards.

The plot of the game was difficult, sure, but at least it focused on Kazuma’s life and the people he connected to. He was the center point of the story through and through, and the 10+ hour main plot would have been more than enough to cram into an hour and a half of video-only entertainment.

Even so, the film decides to give just as much focus to these new characters as Kazuma himself, and this means nobody has enough screen-time to develop themselves in any meaningful way. The game already had a group of individuals with plenty of character and a few arcs of their own, and the film never touches on them.

In the game Makoto Date is a detective who once worked for the homicide unit in Kamurocho. When Kazuma was arrested Date was utterly convinced that Kazuma would never kill his own boss and set out to find out the truth.

Kazuma is released from jail a decade later and discovers a drunk detective blaming him for ruining his life. He couldn’t let go of the case even after he was told to give it up, and was soon moved to the “organized crime unit” where nothing gets solved. It’s a dead end job. His wife and daughter left him after he lost his motivation to keep going, and only after seeing Kazuma try to solve his own mystery does Date start to come back around. He risks life, limb, and his job to help out an ex-Yakuza.

Parts of Date’s story read like a cheesy noire story but his arc is beautiful in it’s subtlety. He doesn’t save the day, but he achieves his own personal glory by helping Kazuma however he can. As he brings himself back up he brings his daughter Saya along with him too, and they begin to repair the broken relationship they’ve long since had. It’s a touching story of personal redemption, and it makes it all the worse that in the film his only character trait boils down to “tough guy cop” the whole way through.

Even the main antagonist Nishiki never explains why he created his own Yakuza family or why he was willing to throw everyone else away just to surpass Kazuma and become Yumi’s true love. He simply shows up at the final battle with barely a word, and loses in a fight to Kazuma.

Those like Reina have it the worst however as they simply do not exist in the film at all. While Reina was not a pivotal character in the original story later on she was the jumping off point for Kazuma to start his investigation. Her bar was also the meeting place for multiple important dialogues between Kazuma and the other Kamurocho residents.

There was a neat idea somewhere within the Yakuza movie. The game gives off the impression that Kamurocho is a wild city with a million little things going on at once, and the movie really wanted to express that, but couldn’t make it as interesting as the established cast and plot. The sole novel concept was that almost all of the new cast members meet up with or indirectly interact with one another during the course of the evening, but it does little to help with the already scattered plotline.
The most obvious answer to a good Yakuza movie may simply be the most boring one. Make it a direct rip of the plot and characters, with maybe a few extra gags or references to future events in the series. Sadly, as it currently is, the movie is incomprehensible for people who aren’t fans, and isn’t that fun for those who understand the game’s story and like the neat characters.